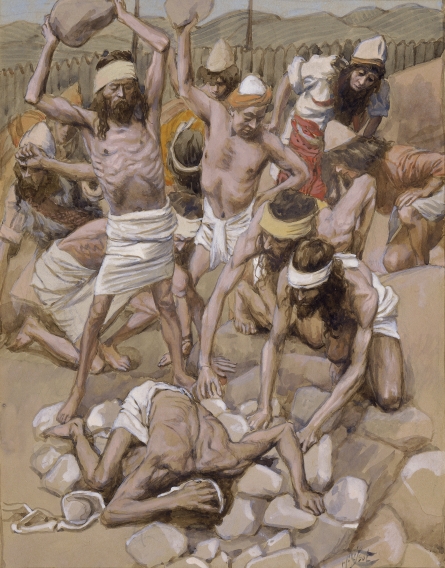 In order to fully understand why God would “command” such a horrible sentence as stoning one to death we need to look at the historical context.

As you may recall, during the time of the Exodus God had given Moses two tablets of stone engraved with the Ten Commandments. Both the tablets and the writing were the work of God. A little later Moses, in an angry rage against the Israelites, threw these tablets down breaking them. As a result, God told Moses to make a new set of tablets and He would write on them what He had written on the first set. As a result, we now have a set of tablets made by Moses (man) and writing from God. This is to show that the Law (instructions) have two purposes working like a mirror which would reflect both divine attributes and fallen humanity’s attributes. It represents the Old Covenant mindset of man trying to perform the works of God instead of allowing God to do His work within us.

Like a mirror, the Torah (Law) not only reveals God’s character but also fallen man’s. Paul said, “I would not have known sin except through the Law” (Romans 7:7), because “sin, seizing the opportunity through the Commandment, produced in me all kinds of wrong desires. For apart from the Law, sin is dead” (Verse 8). And then concluded, “So I found that the very Commandment that was intended to bring life brought death!” (Verse 10). Upon careful reading you will notice that throughout Scripture God commands things that fallen man desires. He does this because He will not interfere with man’s freedom of choice and “… that through the Commandment sin would become utterly sinful” (Romans 7:13).

Many are confused at the love of God when they read such commands to His people to “destroy” the inhabitants of other lands including women and children. Some try to defend this by saying the people who are killed must be cut off like a cancer to save His people. But this would mean God is willing that some should perish when Scripture says just the opposite (see, 2 Peter 3:9). The command to “Go destroy” is a reflection of our hearts and character. God is exposing the sins of His professed people just as much as exposing the unbeliever’s. He’s allowing sin to destroy sin. Again, why does God do this? Romans 5:20 says:

“Moreover the Law entered, that the offence might abound. But where sin abounded, grace did much more abound.”

“When a person has sin in their heart the first work of God is to show the person their sin. The human heart has the capacity to deceive itself. It is blind to its own sinfulness. When we are outside of the desires of God, He will command the things that we desire in order for them to grow and that we might begin to see why they are sinful. But He does not do these things without the opportunity for the person to know that these things are wrong. The commands are interpreted by men to mean God desires them because men are blinded to their own sinfulness. They also choose to believe this because then it makes God look like them and this justifies their sinfulness. [See, Psalm 50:16-21].”

Instead of condemning and judging the man who was gathering wood upon the Sabbath, the Israelites should have gone to him and inquired about his reasoning as to why he was doing this. Then, if found to be in disobedience to God’s design, instruct him in the ways of God to bring reconciliation. But because they had the condemning mindset, they puffed themselves up, and God gave them over to their own desires according to their own perverted view of justice. This would cause their own sin of self-righteousness to abound and then hopefully they repent seeking their own reconciliation.

What Did Jesus Do?

Just remember how Jesus, our perfect example, responds to the same scenario in John 8:2-19. Instead of the leaders bringing to Him a Sabbath-breaker they bring to Him a woman accused of adultery. They do this in order to try and trap Jesus on matters of God’s Law (Verse 6). However, He exposes (magnifies) their own sins by writing in the dust (cf. Jeremiah 17:13) and commands, “Let the person among you who is without sin be the first to throw a stone at her.”

Here we see the very Lawgiver telling us the qualifications of those who are able to do the stoning. They must be without sin. How many of the punishments of the Old Testament could be carried out righteously if those executing the sentence had to be without sin? Is any man qualified of himself to perform such a deed as this? “All have sinned and fall short of the glory of God” (Romans 3:23).

When Jesus gave the sentence from the Law, that which was written in stone caused her to lose all hope of life. She accepted the sentence... Yet Jesus, knowing her heart and how she was used by these men, knew that she had fallen upon the true Stone/Rock:

“And (our forefathers) did all drink the same spiritual drink: for they drank of that spiritual Rock that followed them: and that Rock was Christ.” (1 Corinthians 10:4)

“Jesus saith unto them, Did ye never read in the scriptures, The stone which the builders rejected, the same is become the head of the corner: this is the Lord's doing, and it is marvellous in our eyes? And whosoever shall fall on this stone shall be broken: but on whomsoever it shall fall, it will grind him to powder.” (Matthew 21:42,44)

In falling upon the Rock Christ Jesus, the woman was indeed stoned as Christ intended. She gave up all hope that she could save herself and gave herself up to the mercy of Christ. The stoning that Christ intended was that sinners should be convicted of their sins and seek for mercy

Unlike the Israelites of old, these Pharisees were convicted of sin and chose not to condemn and stone the woman, and then Jesus, displaying His Father’s character, says to her, “Neither do I condemn you, go and sin no more.” This is the same outcome God was seeking when the accusers picked up stones to kill the Sabbath-breaker. Jesus was not abolishing the instruction against adultery but was bringing out the true intent of the statute of stoning.

The Stoning Mindset Came From Egypt

In an article on theblaze.com entitled, fact-check: does the bible really condone stoning?, they asked Rabbi Aryeh Spero concerning this statute:

“... When it comes to perceived Biblical mandates or issues like stoning, the rabbi noted that it’s important to view the holy book through a specific lens. ‘It is our duty to, with reverence and humility, demarcate between that which God intended as eternal and that which was a time-period-necessity later to be eased-out—animal sacrifices, for example ... Things regarding human nature and sexual discipline and limitations undoubtedly are eternal, as are the Sabbath and need for holiness. … Certain procedures were never meant to be permanent and were, instead, based on the habits and mindsets of the original society that God spoke to. The culture, thus, had a major impact on how these procedures were implemented and played out.’”

The mindset of the Israelites concerning stoning during the time of Moses did not come from God, but from Egypt. Moses told Pharaoh: “If we make sacrifices that are an abomination to the Egyptians right before their eyes, will they (the Egyptians) not stone us?’” (Exodus 8:25-26).

Later, the Israelites themselves, being brainwashed into this form of justice for 100’s of years while in slavery, desired to stone Moses:

“ … and the people murmured against Moses and said, ‘Why in the world did you bring us up out of Egypt – to kill us and our children and our cattle with thirst?’ Moses cried out to the LORD, ‘What will I do with this people? – a little more and they will stone me!’” (Exodus 17:3-4)

Just as Jesus spoke the minds of the disciples by calling the Canaanite woman a “gentile dog” to reveal their racial prejudice (Matthew 15:26), God was speaking their minds by commanding stoning in hopes that their eyes will be opened to such a horrific scene of punishment

Their sin of brutally condemning (sacrificing) others to excuse themselves would abound to the point of reaching out and taking hold upon God’s grace, receiving His forgiveness and walk in His mercy. They were to remember, “the one who has shown no mercy will be judged without mercy. Mercy triumphs over judgment” (James 2:13).

God had told them, “I will surely do to you just as you have spoken in My hearing” (Numbers 14:28), which again shows the judgment that falls upon man will be the judgment that man decided for himself. God has said:

This makes it absolutely clear that God will mirror back to us our own thoughts in order to magnify our sinfulness, and take us in our own heart. He never does this in order to condemn us, but so that we will finally see our self-destructive thoughts and actions and turn to Him for healing and restoration.

On another occasion the religious leaders tried to trip Jesus up on the Law concerning divorce:

“The Pharisees also came unto Him (Jesus), tempting Him, and saying unto Him, Is it lawful for a man to put away his wife for every cause? And He answered and said unto them, Have ye not read, that He which made them at the beginning made them male and female, And said, For this cause shall a man leave father and mother, and cleave to his wife: and they twain (two) shall be one flesh? Wherefore they (husband and wife) are no more twain (two), but one flesh. What therefore God hath joined together, let no man put asunder. They say unto Him (Jesus), Why did Moses then command to give a writing of divorcement, and put her away? He saith unto them, Moses because of the hardness of your hearts suffered (permitted) you to put away your wives: but from the beginning it was not so.” (Matthew 19:3-8)

When our first parents ate the fruit and accepted the principles of Satan’s kingdom they accepted the mind of Satan in regard to law and justice. The justice system of Satan does not provide for any mercy. In the case of God, sin means anything that is outside of His creative design for life. In the case of Satan, however, sin means anything that disagrees with his own thoughts. Therefore, as human beings we have inherited this notion that all those who disagree with us must be punished without mercy according to the crime. This is the reason why Israel so willingly embraced the Egyptian practice of stoning; it reflected the merciless mind of Satan.

Won’t you live by our heavenly Father’s standard? “For you will be evaluated by the same standard as you evaluate others” (Matthew 7:1-2).

1 See the article entitled, What About the Retributive Justice of “An Eye For An Eye”?

For a deeper study of what you’ve just read see the book, The Conviction of Sin and Righteousness.

For an abbreviated trifold tract of what you’ve just read see, Why Did God Command Stoning?