"And GOD saw that the wickedness of man was great in the earth, and that every imagination of the thoughts of his heart was only evil continually. And it repented the LORD that He had made man on the earth, and it grieved Him at his heart. And the LORD said, I will destroy man whom I have created from the face of the earth; both man, and beast, and the creeping thing, and the fowls of the air; for it repenteth Me that I have made them." (Genesis 6:5-7)

How do you read these verses in Scripture? Is God so angry at mankind that He violently destroys them with a flood like a tyrannical dictator? Do you read the word “repenteth” as God regretting ever creating mankind? Well, instead of wading in the shallow end, let’s dive a little deeper into the water.

Scripture Language You Must Get to Know

“I will destroy.” What exactly does this mean when God says this phrase? Can a God of love ever be the direct cause of destruction? John writes that “God is love” (1 John 4:8). Paul writes, “Love never does anything that is harmful to its neighbor [any other being]. Therefore, love is the fulfillment of the Law” (Romans 13:10). Since God is love, and love never does anything harmful to others, then God does not ever harm others. So, when God says “I will destroy”, it must mean something different than our preconceived ideas want to think.

When it comes to God, the phrase “I will destroy” is used as a Hebrew idiom. There are two classes of idioms that can be used. 1. Causative. 2. Permissive. The writer’s use of the phrase is always in the permissive form when it comes to quoting God. So, when God says, “I will destroy”, it is to be understood that He will permit the destruction to come which is caused by someone or something else besides God.

Commenting on 2 Chronicles 25:16 which says, “… I know that God hath determined to destroy thee …”,   Robert Young, described this particular idiom as “… the well-known scripture idiom whereby what God allows he is said to do.” (Young, Robert, 1868, A Commentary on the Holy Bible, as Literally and Idiomatically Translated out of the Original Languages, p. 315).

Commenting on 1 Kings 22:23 which says, “… behold, the LORD hath put a lying spirit in the mouth of all these thy prophets …”, Adam Clarke uses this same principle by saying, “He hath permitted or suffered a lying spirit to influence thy prophets. Is it requisite again to remind the reader that the Scriptures repeatedly represent God as doing what, in the course of his providence, he only permits or suffers to be done? Nothing can be done in heaven, in earth, or hell, but either by his immediate energy or permission. This is the reason why the Scripture speaks as above.”

To show that this is not just Robert Young’s or Adam Clarke’s own private interpretation on the matter, we can read what is written concerning the death of King Saul. In 1 Chronicles 10:13-14 we read:

"So Saul died for his transgression which he committed against the LORD, even against the word of the LORD, which he kept not, and also for asking counsel of one that had a familiar spirit, to inquire of it; And inquired not of the LORD: therefore he (God) slew him, and turned the kingdom unto David the son of Jesse."

Here we clearly read that God killed Saul. However, is this in the causative or permissive sense? The answer is in verses 3-6:

“And the battle went sore against Saul, and the archers hit him, and he was wounded of the archers. Then said Saul to his armourbearer, Draw thy sword, and thrust me through therewith; lest these uncircumcised come and abuse me. But his armourbearer would not; for he was sore afraid. So Saul took a sword, and fell upon it. And when his armourbearer saw that Saul was dead, he fell likewise on the sword, and died. So Saul died, and his three sons, and all his house died together.”

Clearly it is in the permissive sense. God “slew” Saul by not preventing him from committing suicide.

Our Sins Directly Affect the Earth:

So how can we apply these principles to the flood? It’s easy when you consider that, since mankind was created from the dust of the earth, our sins have a direct affect upon the earth itself. After Adam and Eve sinned, the ground became cursed and began to produce thorns and weeds (Genesis 3:17-8). Notice what Isaiah writes about the affect sin has upon the earth:

In Leviticus chapter 18 we see that, since the earth itself is defiled, it produces violent behavior like its sinful inhabitants:

“And the land is defiled: therefore I do visit the iniquity thereof upon it, and the land itself vomiteth out her inhabitants. Ye shall therefore keep My statutes and My judgments, and shall not commit any of these abominations; neither any of your own nation, nor any stranger that sojourneth among you: (For all these abominations have the men of the land done, which were before you, and the land is defiled;) That the land spue not you out also, when ye defile it, as it spued out the nations that were before you.” (Leviticus 18:25-28)

Here we read that “the earth itself vomited out her inhabitants.” In Genesis chapter 7 we read:

"In the six hundredth year of Noah's life, in the second month, the seventeenth day of the month, the same day were all the fountains of the great deep broken up, and the windows of heaven were opened." (Genesis 7:11)

This explains God’s statement when He said, “The land is defiled: therefore I do visit the iniquity thereof upon it.” Just as God “slew” Saul by not preventing him from committing suicide, God visited the iniquity upon the earth by not preventing it from vomiting out her inhabitants. He permitted a chain of circumstances to play out which resulted in sin destroying sin.

God’s message to the antediluvians was a message of mercy. He wanted to prevent the earth from vomiting out her inhabitants, but the people wanted nothing to do with God, and the more they rebelled, the more violent the earth itself was becoming.

“And GOD saw that the wickedness of man was great in the earth, and that every imagination of the thoughts of his heart was only evil continually … The earth also was corrupt before God, and the earth was filled with violence. And God looked upon the earth, and, behold, it was corrupt; for all flesh had corrupted his way upon the earth.” (Genesis 6:5, 11, 12)

Clearly the earth itself was “corrupt” due to her inhabitants being corrupt. The Hebrew word for “corrupt” here actually means “destroyed” or “ruined.” Notice how verses 11 and 12 are translated in the New English Translation:

The earth was already in a state of destruction before the flood came. It was not then destroyed because of God’s Spirit – His abiding presence. However, He warned:

“… My Spirit shall not always strive with man, for that he also is flesh: yet his days shall be an hundred and twenty years.” (Genesis 6:3)

The antediluvians were pushing God away, and since God does not interfere with our free choice, He knew that at this rate the earth would vomit out her inhabitants in 120 years' time. But the people continued to resist the pleadings of His Spirit to turn from their sins, thus the earth was becoming more violent every passing year.

“For Christ also hath once suffered for sins, the just for the unjust, that He might bring us to God, being put to death in the flesh, but quickened by the Spirit: By which [by His Spirit] also He went and preached unto the spirits in prison (those held captive in the prison house of sin; Psalm 142:7); Which sometime were disobedient, when once the longsuffering of God waited in the days of Noah, while the ark was a preparing, wherein few, that is, eight souls were saved by water.” (1 Peter 3:18-20)

The Spirit of Christ preached unto the antediluvians for 120 years while the ark was being prepared. If millions of people would have repented, then the earth and the sea would have calmed down. The waters of the earth would have heard Jesus’ voice command, “Peace, be still!” But they refused. Instead they chose to tell God to get lost.

“Hast thou marked the old way which wicked men have trodden? Which were cut down out of time, whose foundation was overflown with a flood: Which said unto God, Depart from us: and what can the Almighty do for them?” (Job 22:15-17)

Scripture tells us that God “gave to the sea His decree, that the waters should not pass His commandment” (Proverbs 8:29). God’s commandment (His Word) holds the waters in their place. If He goes away, His Word will be forced to let go. Jesus is “the Word of God” (Revelation 19:13) and He is “upholding all things by the word of His power” (Hebrews 1:3). The antediluvians chose to “crucify to themselves the Son of God afresh” (Hebrews 6:6). Instead of accepting the invitation of Christ's Spirit, they chose to "hold (suppress/hold down) the truth in unrighteousness" (Romans 1:18). There was no calming voice to be heard and thus the waters gushed out of their place in violent chaos.

God Himself did not drown these men, women and children out of vengeful spite. The flood came as a natural result of the absence of His presence, just as darkness is the natural result of the absence of light. The unbelieving antediluvians had willfully drowned out (supressed/held down) the Spirit of Christ. Thus, by cutting themselves off from the only source of life, they drowned themselves in the water, fulfilling the Scripture which warns:

“See the one who is pregnant with wickedness, who conceives destructive plans, and gives birth to harmful lies – he digs a pit and then falls into the hole he has made. He becomes the victim of his own destructive plans and the violence he intended for others falls on his own head.” (Proverbs 7:14-16, NET)

Will you enter the Ark today? 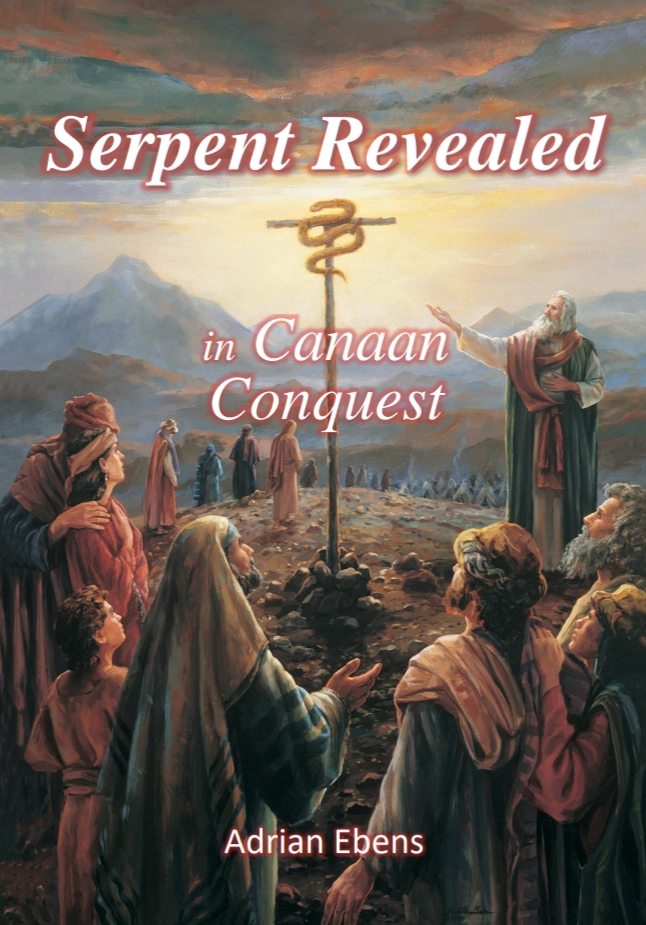