“And the Jews' Passover was at hand, and Jesus went up to Jerusalem, And found in the temple those that sold oxen and sheep and doves, and the changers of money sitting: And when He had made a scourge of small cords, He drove them all out of the temple, and the sheep, and the oxen; and poured out the changers' money, and overthrew the tables; And said unto them that sold doves, Take these things hence; make not my Father's house an house of merchandise.” (John 2:13-16)

When most people think of this incident they think of Jesus going into a rage. I even heard one pastor on the radio say “Jesus went into the temple and started throwing people around.” The mental images people dwell on are represented by the following two illustrations:

But, although Jesus overthrew the tables, nowhere is it mentioned that Jesus physically touched anyone. Jesus was actually working in accordance with the Law which states:

“But thus shall ye deal with them; ye shall destroy their altars, and break down their images, and cut down their groves, and burn their graven images with fire.” (Deuteronomy 7:5)

Jesus never harmed anyone. In fact, 700 years earlier, the prophet Isaiah spoke of the coming Messiah saying, “He had done no violence” (Isaiah 53:9). Take note that only those with a self-condemning conscience were afraid and ran away. However, the dear little children who had witnessed the event were not afraid and began to sing praises to God while the blind and lame stayed by and were healed. Take a look at Matthew’s account:

“And Jesus went into the temple of God, and cast out all them that sold and bought in the temple, and overthrew the tables of the moneychangers, and the seats of them that sold doves, And said unto them, It is written, My house shall be called the house of prayer; but ye have made it a den of thieves. And the blind and the lame came to Him in the temple; and He healed them. And when the chief priests and scribes saw the wonderful things that He did, and the children crying (shouting) in the temple, and saying, Hosanna to the Son of David; they were sore displeased, And said unto Him, Hearest thou what these say? And Jesus saith unto them, Yea; have ye never read, Out of the mouth of babes and sucklings thou hast perfected praise? And He left them, and went out of the city into Bethany; and He lodged there.” (Matthew 21:12-17)

So, Jesus only appeared violent to those who did not fully understand His character. Like the Israelites at the bottom of Mount Sinai, they stood self-judged and self-condemned, as Jesus appeared to be a consuming fire:

“To the Israelites at the foot of the mountain, the glory (character) of the LORD appeared at the summit like a consuming fire.” (Exodus 24:17)

The King James Version says it this way:

“And the sight of the glory of the LORD was like devouring fire on the top of the mount in the eyes of the children of Israel.”

He appeared that He was going to devour them with fire – "IN THEIR EYES" – in their false understanding of His character. Jesus’ actions were to convict the moneychangers of their sins in order for them to reach out and simply accept His everlasting love and forgiveness. Jesus never condemned anyone. Everything He does is out of love, even to those who are against Him:

“Those I love, I rebuke and discipline. Therefore be earnest and repent. Behold, I stand at the door and knock. If anyone hears My voice and opens the door, I will come in and dine with him, and he with Me.” (Revelation 3:19, 20, Berean Study Bible)

“But love ye your enemies, and do good, and lend, hoping for nothing again; and your reward shall be great, and ye shall be the children of the Highest: for He is kind unto the unthankful and to the evil.” (Luke 6:35, 36)

“Therefore if thine enemy hunger, feed him; if he thirst, give him drink: for in so doing thou shalt heap coals of fire on his head. Be not overcome of evil, but overcome evil with good.” (Romans 12:20, 21)

Two Different Effects to a Gospel of Love

This story of the cleansing of the temple gives us insights to what took place in heaven as Satan and his angels were “cast down to the earth” (Revelation 12:9). Many view this as God grabbing Satan and throwing him out, or casting him down, to earth. They imagine some form of physical warfare where God and His angels defeated Satan and his angels and kicked them out of heaven. The book of Jude refers to the “angels who did not keep their own domain but abandoned their proper dwelling place …” (Jude 1:6, New American Standard Bible). Satan and his angels could not stand to be in the presence of such a loving Creator, so they ran out. Paul speaks of this effect of the gospel of love:

Those in the temple during Christ’s earthly mission disbelieved in God’s everlasting loving kindness and so they ran out of the temple thinking Jesus was going to cause them harm. This concept is shown in the book of Psalms:

“With the purified you show yourself pure; and with the crooked you make yourself seem (or, appear) tortuous.” (Psalm 18:26, English Standard Version)

The word “tortuous” means “cruel” or “afflicting.” Those who seek to afflict their enemies will project their character onto the god they worship, thinking he does the same thing. Isaiah wrote:

“In all their affliction He was afflicted, and the angel of His presence saved them: in His love and in His pity He redeemed them; and He bare them, and carried them all the days of old. But they rebelled, and vexed His Holy Spirit: therefore He was turned to be their enemy, and He fought against them.” (Isaiah 63:9, 10)

Interestingly, the Hebrew word translated as “tortuous” in Psalm 18:26 above is פָתַל (pathal) also carries the meaning of “to wrestle.” Note Young’s Literal Translation:

This is yet another element to the story of Jacob who, in the dark hours of the night, felt the hand of Jesus touch him, but he assumed it was an enemy, so he began to wrestle with Him (Genesis 32:22-32). How many times do we face setbacks and tragedies in life and think that it is God who is afflicting us? We need not be afraid of our heavenly Father. He is ALWAYS on our side:

How Will You React?

It all depends on how you view God in your eyes. Do you perceive Him as a loving heavenly Father who has been bearing all your affliction and who desires His wayward children to come home? Or do you perceive Him as a relentless vindictive judge who will punish and kill anyone who disobeys Him? If it’s the latter, then the book of Revelation describes your reaction, when you see Christ coming in the clouds, as those who ran out of the temple:

“And the heaven departed as a scroll when it is rolled together; and every mountain and island were moved out of their places. And the kings of the earth, and the great men, and the rich men, and the chief captains, and the mighty men, and every bondman, and every free man, HID THEMSELVES in the dens and in the rocks of the mountains; And said to the mountains and rocks, Fall on us, and hide us from the face of him that sitteth on the throne, and from the wrath of the Lamb: For the great day of His wrath is come; and who shall be able to stand?” (Revelation 6:14-17)

But if your perception of God is in harmony with His word, knowing and trusting that He is love, your reaction to Jesus coming in the clouds will be as the little children and the blind who came to be healed:

“He will swallow up death in victory; and the Lord GOD will wipe away tears from off all faces; and the rebuke of His people shall He take away from off all the earth: for the LORD hath spoken it. And it shall be said in that day, Lo, this is our God; we have waited for Him, and He will save us: this is the LORD; we have waited for Him, we will be glad and rejoice in His salvation.” (Isaiah 25:8, 9) 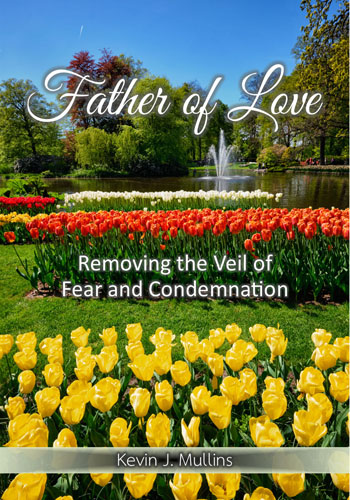