Articles » Questions Concerning Bible Prophecy »
Print
Note: In order to gain a full understanding of this study, I urge you to read the previous lesson first

In this chapter we find that Daniel had a dream of his own. In this dream he saw “four great beasts came up from the sea, diverse one from another” (Daniel 7:3).

The four beasts Daniel saw were:

After Daniel saw these four beasts he asked an angel, who was standing by, to tell him the meaning of all this. The angel said, “These great beasts, which are four, are four kings, which shall arise out of the earth” (verse 17).

The Lion with Two Wings 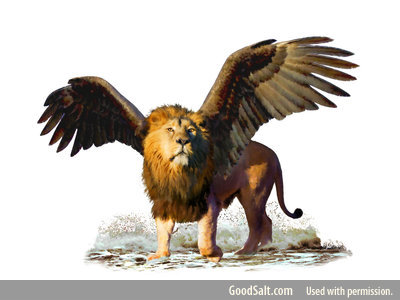 “The first was like a lion, and had eagle's wings: I beheld till the wings thereof were plucked, and it was lifted up from the earth, and made stand upon the feet as a man, and a man's heart was given to it.” (Daniel 7:4)

The prophet Jeremiah warned Israel that, because of their rebellion into idolatry and profaning His name (character), God would give them over to their heart’s desire by sending Babylonian armies. When describing the kingdom of Babylon he said, “The king of Babylon hath heard the report of them … Behold, he shall come up like a lion from the swelling of Jordan” (Jeremiah 50:43, 44).

The two wings of an eagle represent swiftness, or speed:

During the reign of king Nebuchadnezzar, the kingdom of Babylon was very strong. Daniel foresaw that the wings of the kingdom (which represent speed) would be “plucked” and be given a “man’s heart” (which means it would become week and afraid - see also Jeremiah 51:30). 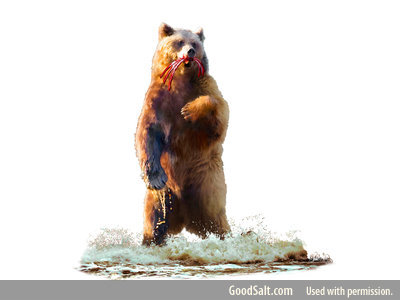 The Bear with Three Ribs in its Mouth

“And behold another beast, a second, like to a bear, and it raised up itself on one side, and it had three ribs in the mouth of it between the teeth of it: and they said thus unto it, Arise, devour much flesh.” (Daniel 7:5)

Since this second beast is to represent the same second kingdom that Nebuchadnezzar saw in his dream, we can conclude that this second beast represents the kingdom of Medo-Persia. In time the Persians became dominant over the Medes, and this is why Daniel saw that this bear “raised up itself on one side.” Thus, we see a clear connection between the two sides of this bear, the two horns of the ram in Daniel 8, and the two arms of the great image that king Nebuchadnezzar saw! The three ribs in the bear’s mouth would represent the three principle kingdoms conquered by Medo-Persia:  Babylon, Lydia, and Egypt.

The Leopard with Four Wings 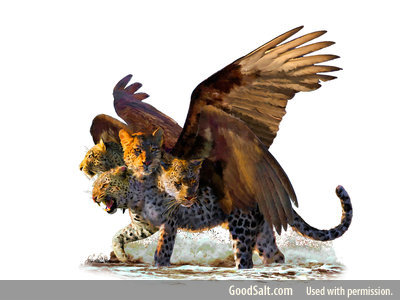 “After this I beheld, and lo another, like a leopard, which had upon the back of it four wings of a fowl; the beast had also four heads; and dominion was given to it.” (Daniel 7:6)

Since this third beast represents the same third kingdom that Nebuchadnezzar saw, then this beast must represent the kingdom of Greece. Daniel also saw that the leopard-like beast had four heads. After Alexander the Great’s death, the Grecian Empire was divided by civil war into exactly four parts. Alexander's four leading generals took control of these nations: Cassander (west), Lysimachus (north), Seleucus (east), Ptolemy (south).

Just as the lion had two wings of an eagle this leopard had four. This shows the much greater speed that the Grecian armies had.

“For, lo, I raise up the Chaldeans, that bitter and hasty nation, which shall march through the breadth of the land, to possess the dwellingplaces that are not theirs. They are terrible and dreadful: their judgment and their dignity shall proceed of themselves. Their horses also are swifter than the leopards, and are more fierce than the evening wolves: and their horsemen shall spread themselves, and their horsemen shall come from far; they shall fly as the eagle that hasteth to eat.” (Habakkuk 1:6-8)

Sir William Woodthorpe Tarn, a Cambridge Historian, states that “His [Alexander’s] speed of movement was extraordinary.” (Alexander: The Conquest of the Far East, ch. 13).

The Beast with Ten Horns 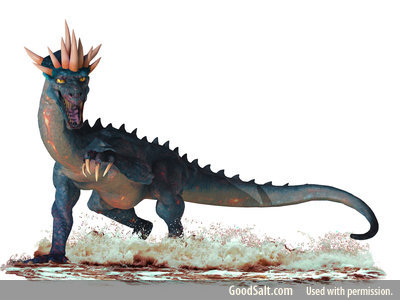 “After this I saw in the night visions, and behold a fourth beast, dreadful and terrible, and strong exceedingly; and it had great iron teeth: it devoured and brake in pieces, and stamped the residue with the feet of it: and it was diverse from all the beasts that were before it; and it had ten horns.” (Daniel 7:7)

The angel had told Daniel that “it was diverse from all the beasts that were before it.” The kingdom of Rome as a whole inherited and subdued all of the characteristics and pagan philosophy from the previous three kingdoms of Babylon, Medo-Persia and Greece. In the book of Revelation we see that John also had a vison of this ten-horned beast. Take a look at how he describes it:

“And I stood upon the sand of the sea, and saw a beast rise up out of the sea, having seven heads and ten horns, and upon his horns ten crowns, and upon his heads the name of blasphemy. And the beast which I saw was like unto a leopard, and his feet were as the feet of a bear, and his mouth as the mouth of a lion: and the dragon gave him his power, and his seat, and great authority.” (Revelation 13:1, 2)

As you remember from our previous study, we noticed that when a prophet is describing various kingdoms, he always begins with the kingdom which is reigning at the time of the vision. Daniel was living in the time of Babylon thus he began with Babylon describing it as a lion. He then moved on to Medo-Persia (bear), then to Greece (leopard), then to Rome (dreadful one). John, on the other hand, lists the same beasts, but in the opposite order. He begins with the dreadful beast, then lists the remaining beasts like this: leopard, bear, lion. Why? Because John is living in the time of Daniel’s fourth beast! He’s living in the time of Pagan Rome! Daniel looked forward from Babylon to Rome while John looked backward from Rome to Babylon. This makes it absolutely clear that the ten-horned beast is non-other than Rome! And since it is made up of all the previous beasts before it, Rome would be an expansion, or a conglomeration (mixture), of all the beasts (kingdoms) before it. Need more proof?

In Revelation chapter 12 we read of a woman who gives birth to man Child “who was to rule all nations with a rod of iron: and … was caught up unto God, and to His throne” (verse 5). Without a shadow of a doubt this Child is referring to Jesus (see Psalm, 2:7-9; Revelation 19:11-15). We also see that, before Jesus was born, while the woman was “travailing in birth, and pained to be delivered” (Revelation 12:2) John describes this scene:

“And there appeared another wonder in heaven; and behold a great red dragon, having seven heads and ten horns, and seven crowns upon his heads. And his tail drew the third part of the stars of heaven, and did cast them to the earth: and the dragon stood before the woman which was ready to be delivered, for to devour her child as soon as it was born.” (Revelation 12:3, 4)

The Rise of a Little Horn 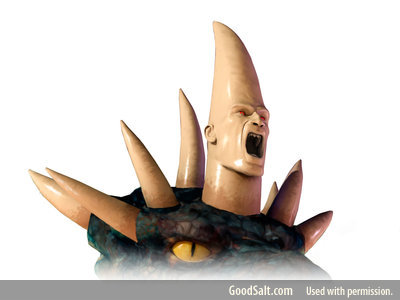 “I considered the horns, and, behold, there came up among them another little horn, before whom there were three of the first horns plucked up by the roots: and, behold, in this horn were eyes like the eyes of man, and a mouth speaking great things.” (Daniel 7:8)

Daniel saw another horn rising from among the other ten. An angel had this to say concerning this fourth beast, its ten horns, and the little horn that rose after:

“…  The fourth beast shall be the fourth kingdom upon earth, which shall be diverse from all kingdoms, and shall devour the whole earth, and shall tread it down, and break it in pieces. And the ten horns out of this kingdom are ten kings that shall arise: and another shall rise after them; and he shall be diverse from the first, and he shall subdue three kings. And he shall speak great words against the most High (God), and shall wear out the saints of the most High, and think to change Times and Laws: and they shall be given into his hand until a time and times and the dividing of time.” (Daniel 7:23-25)

Here are the characteristics we have:

A Woman Riding the Beast 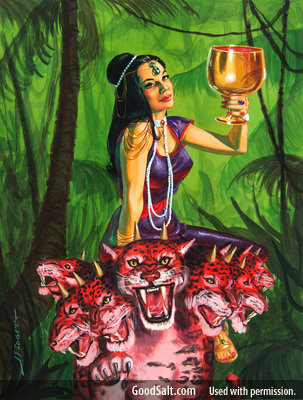 “And there came one of the seven angels which had the seven vials, and talked with me, saying unto me, Come hither; I will shew unto thee the judgment of the great whore that sitteth upon many waters: With whom the kings of the earth have committed fornication, and the inhabitants of the earth have been made drunk with the wine of her fornication. So he carried me away in the spirit into the wilderness: and I saw a woman sit upon a scarlet coloured beast, full of names of blasphemy, having seven heads and ten horns.” (Revelation 17:1-3)

In Bible prophecy a woman represents a church system. A gentle loving woman represents God’s church (as can be seen in Revelation chapter 12 and the woman who gave birth to Jesus). God has said, “I have likened the daughter of Zion to a comely and delicate woman” (Jeremiah 6:2) and then says, “… Zion, Thou art My people” (Isaiah 51:16). Paul wrote: “I have espoused you (the church) to one husband, that I may present you as a chaste virgin to Christ” (2 Corinthians 11:2). But a “whore” or immoral, violent woman would represent a false church system which has departed from the LORD: “… for the land hath committed great whoredom, departing from the LORD” (Hosea 1:2).

Therefore, we now have another clue as to who this little horn truly represents. Daniel told us that the little horn would “speak great words against the Most High (God)”, and here in the book of Revelation we see the same ten-horned beast is “full of names of blasphemy.”

“And the beast which I saw was like unto a leopard (Greece), and his feet were as the feet of a bear (Medo-Persia), and his mouth as the mouth of a lion (Babylon).” (Revelation 13:2)

“And here is the mind which hath wisdom. The seven heads are seven mountains, on which the woman sitteth.” (Revelation 17:9) 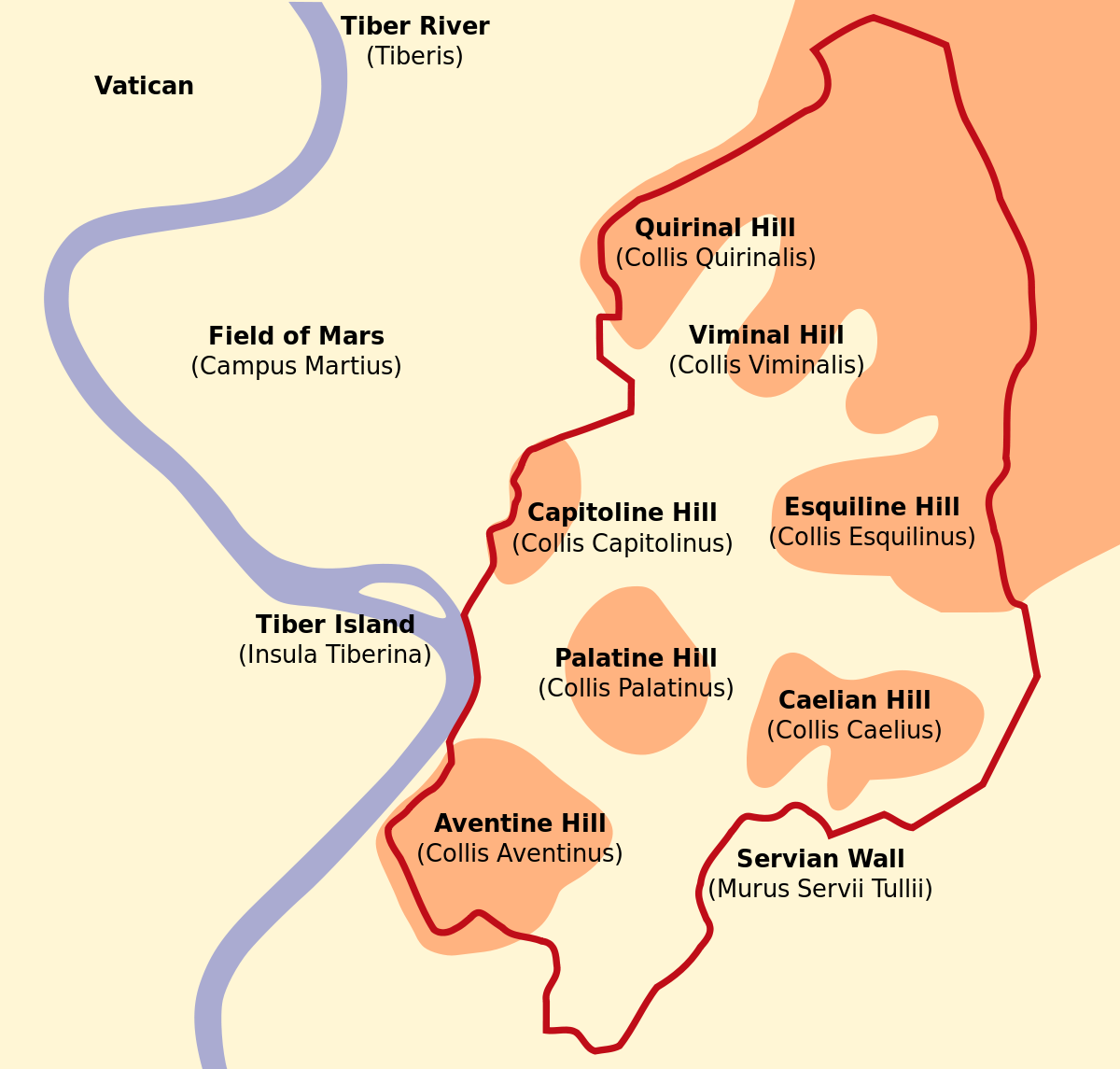 “Seven Hills of Rome: group of hills on or about which the ancient city of Rome was built. The original city of Romulus was built upon Palatine Hill … The other hills are the Capitoline, Quirinal, Viminal, Esquiline, Caelian, and Aventine.” (Encyclopaedia Britannica)

The little horn is known as the great antichrist power. Please note that this little horn power is a religious system which would rise from ROME, not only “among” the other ten horns, but “after” they are established. In our previous lesson we learned that the ten divisions of Rome came in the year 476 A.D. Did such a religious power rise in Rome shortly after 476 A.D. who has done the things listed above?

We’ll find out in our next study: The Little Horn (Part One)